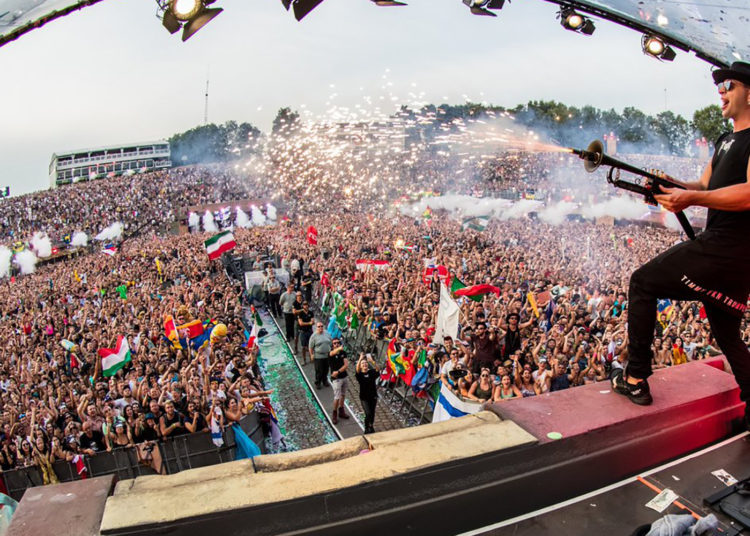 Multi-platinum DJ, producer and live instrumentalist, Timmy Trumpet has unleashed his new single, ‘Mad World’, in collaboration with Grammy nominated Italian DJ/producer Gabry Ponte. Almost two decades since Michael Andrews and Gary Jules crafted ‘Mad World’ into a UK #1 smash-hit, Timmy & Gabry deliver a reimagining of a masterpiece, custom made for a time in history where the title has never been more fitting.

“I was in the middle of a 30-date U.S tour with Steve Aoki when global pandemic alarm bells rang out” says Timmy. “One night we were playing to 10,000, the next day I’m on a flight home to Australia. Since then I’ve focused on making music that speaks to our experiences of now. Mad World is timeless and timely. Its’ magic deserves to be shared with another generation and it was an honor to work with Gabry on bringing a new sound to an iconic composition.”

The music video was filmed in the heart and at the height of 2020’s narrative – the streets of Philadelphia. It was shot the day after the US election amidst protests, unrest and with the power of the free world hanging in the balance. This stunning story of an emotional rollercoaster captures the journey of a young woman with hopes of a new year that could have been.

The music video directed by Shaun David Barker & Matt Henry was the second time the film makers have worked with Timmy Trumpet this year. The trio teamed up on “Diamonds” Timmy’s first track released after lockdown, which was the first music video to be entirely shot and directed in isolation.

“We wanted to tell a story that embodies the constant frustration, the push and pull, the ups and downs of everyday life as we’ve come to know it. The logistics of shooting a music video during a pandemic were unbelievably challenging. Add full street closures and health, safety and security concerns with political turmoil, it was just the right mix of madness and resilience” says director, Shaun David Barker.

Timmy and Gabry’s reimagining of the production, pays respect to the earlier rendition by highlighting the piano section in all its glory. “It’s just too perfect to touch. It’s the song I wish I wrote, and it’s been

a rewarding musical experience reworking the arrangement with Gabry” says Trumpet. The infamous vocal is pitched up and present from the very start, quickly joined by a bed of drums laced with dark undertones that increase the intensity towards the drop. Timmy’s signature instrument offers accents throughout, accompanying the driving beat and bassline before returning us to a sense of calm in the classical breakdown.

Timmy has shot to global stardom in the electronic music scene over the past few years headlining festivals like EDC, Creamfields and Tomorrowland, and was just voted the #10 DJ in the world in the DJ Mag Top 100. He first began touring in the US in 2014 when his breakout hit ‘Freaks’ went Gold, and globally reigned in more than half a billion streams. It was only fitting that Timmy chose to continue the Mad World story in the epicenter of turbulent times, a place he holds dear to his heart.

Gabry Ponte is one of the influential producers in electronic music with a career spanning three decades. His debut production as part of the group Eiffel 65 was “Blue (Da ba dee)” – the global smash that would sell over 8 million copies. Last summer Gabry teamed up with LUM!X to release “Monster” which has surpassed more than 150 Million streams and has been certified platinum in Germany, France, Switzerland and Austria.

“Mad World” is also the lead single from Timmy’s upcoming debut artist album of the same name due to hit streaming platforms December 4.

Stream all your favorite psytrance tracks in the playlist below – follow here.

Gustavo Mota, Kam1l, And Caio Monteiro Come Together On The Infectious ‘Back To The Club’!